Near the district of Skagafjörður is the 150MW hydropower plant of Blanda. This power plant is an important link in the energy production and distribution in Iceland and energy form this power plant is distributed on the main power grid. From Blanda 132KV lines that are part of the national power grid are connected to the substations in Varmahlíð and Laxárvatn. A new 220KV power line from Blanda, eastbound via the substation in Varmahlíð towards Akureyri is due in 2014/2015, strengthening the circle connection of the Icelandic power grid even further.

The town of Sauðárkrókur has had a weak power connection for some time, since only one 66KV line transports energy to the town. In the year 2015 a new 66KV line will be laid parallel to the current line with the intention of using this new line as a main power supply for the town, while the current line will be a reserve. The lines will be able to transport about 30MW each, to a town using about 10MW.

Available energy in Sauárkrókur will therefore be about 20MW, given that the second line will only be used as reserve. It will though be possible to use both lines for supplying energy to Sauðárkrókur while new lines are planned and built, thus transporting up to 50MW in addition to what the town needs today. 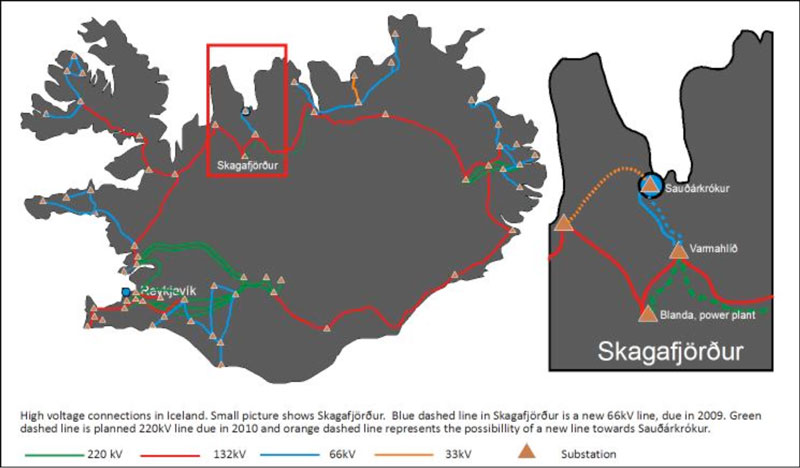 Additions to the power connection to the town of Sauðárkrókur will be from another substation on the power grid making the power supply in the town one of the most reliable in the country. Decisions on those additions will be made if the demand for energy rises. With the erection of a carbon fiber plant in Sauðárkrókur on the horizon, these additions to the power grid will probably be concerned in near future. Planning and construction time of new power lines is estimated to be 3-5 years. The municipality of Skagafjörður is now preparing to add new lines in to the zoning plan of the area, thus shortening planning and construction time for new power lines.

By connecting to the power grid in Iceland, consumers get electricity delivered at site, regardless of the energy production sites location or the location of consuming site. Since green energy is a limited resource and there is a significant loss of energy in the transportation, there is an advantage in locating a power consuming businesses near the power source. In addition to the power plant of Blanda, new opportunities in electricity production in the area have been studied revealing the possibility of producing up to 180MW in the local glacial rivers in Skagafjörður. No decisions have been made on the matter, but with increased demand for electricity in the area, these opportunities will be studied further.